(or, perhaps more appropriately, “Why the PureScript community does not use npm”)

Lots of people dislike having to use Bower as the PureScript package manager, for various reasons. It certainly has problems, but I do think it’s the best choice currently available, so I am writing this post, which explains why.

Before I start, a quick notice: if Bower (or any other part of the standard PureScript toolchain) is causing you problems, we would like to know! The #purescript IRC channel on freenode is a good place to ask, as is the mailing list.

The main reason PureScript does not use npm is to do with the way npm deals with dependency conflicts.

For example, suppose I am writing a package which depends on purescript-maps with bounds >= 2.0.0 < 3.0.0. Suppose we now want to depend on some other package; let’s call it purescript-foo. The purescript-foo package happens to declare different version bounds for purescript-maps: it uses >= 1.0.0 < 2.0.0. So if we wrote out our dependency tree, it might look like this:

Unfortunately, there is no version of purescript-maps which can satisfy both of these constraints. So what does the package manager do here?

npm’s solution to this problem is to nest the dependencies. The files end up looking a bit like this on the disk:

Unfortunately, this doesn’t work well with PureScript code. Suppose that purescript-foo exports a function like this:

So, you call doSomething, providing a Map Foo Bar, which you constructed with your copy of purescript-maps. This gives you a runtime error!

One of the main benefits of PureScript is supposed to be code that you can have confidence in; runtime errors should turn into compile-time ones. So we can’t have this.

I’m going to delve into the technical details of how this happens and how we might stop this from happening now, but in case you don’t want to read all that, the short answer is: Bower solves this problem by having “flat” dependencies. No nesting occurs; instead, if there are conflicts, Bower will ask you how to resolve them. That is, it will ask you to choose one particular version, even though it will violate the constraints declared by one or more of the other packages.

In most cases, though, it’s better to loosen one or more of your constraints, or your dependencies’ constraints, so that an install plan can be found. This will sometimes require changes to your code and/or your depenencies’ code.

Of course, this situation is not ideal either, but it’s much better than runtime errors. Additionally, there is a lot we could do to reduce the likelihood of such dependency conflicts happening (and I might write about this later).

That runtime error happened because purescript-foo is expecting the Map argument to doSomething to have been constructed by the same copy of purescript-maps as the one it has installed. Currently, pattern matching on sum types in PureScript is based on instanceof checks, which effectively means that passing values between different versions of dependencies like this is not safe — a value constructed by purescript-maps@1.0.0 will not be considered to be an instanceof the Map type in purescript-maps@2.0.0.

There are a few things we could do to alleviate this issue, and I’m going to discuss a few of them now, but my current view is that they all end up introducing worse problems, and so I think we should stick to flat dependencies for now.

Distinguishing versions in the type checker

One solution could be to allow multiple versions of a particular library to be installed, but distinguish them in the type checker, so, for example, purescript-maps@1.0.0:Map would be a separate type from purescript-maps@2.0.0:Map. It’s not clear whether this is a good idea, though. While it goes some way towards alleviating problems of “dependency hell” by reducing the likelihood of dependency conflicts, it introduces new problems:

Note that these ideas came from Evan Czaplicki, the creator of Elm, and not me. See also the relevant elm-package issue.

Unfortunately, it defining what a “private” dependency actually is seems quite thorny: consider these slides from a talk by Andres Löh and Duncan Coutts from Well-Typed, which broadly discusses the same issues in the context of Haskell: 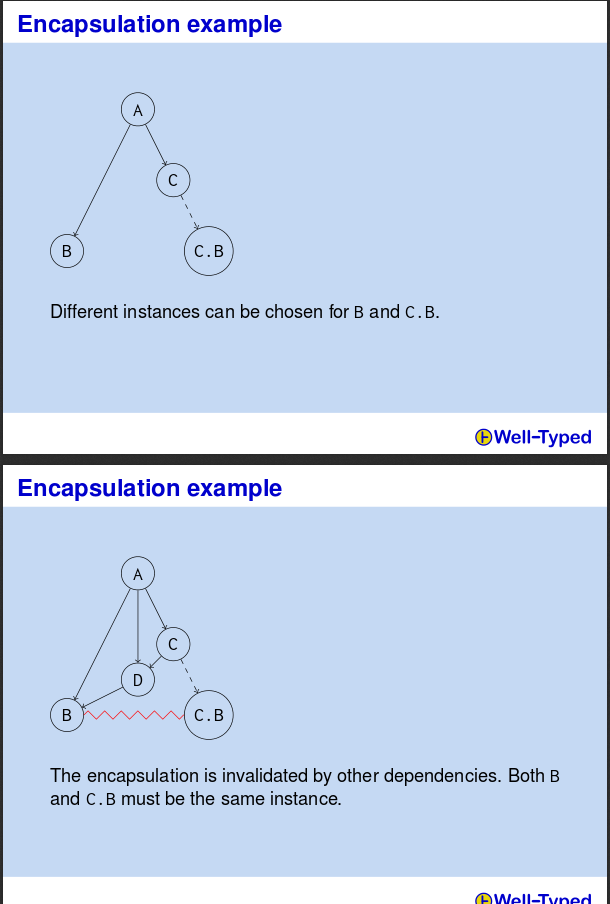 Further, if there are two copies of the same function from two different versions of the same library, and these functions happen to have the same type but have slightly different behaviour, it’s probably not going to be obvious which one is actually being used in some situations. I worry that this could lead to bugs which would be incredibly difficult to diagnose.